While the war in Ukraine and its devastating effects on the country’s animals dominate international headlines (and much of our current work), the reality is that animals continue to face mounting crises all over the globe, and we have to be there for them. We are – and with your support today, we will continue to save lives.

A chilling example is in Kenya, where endangered giraffes are being wiped out by a militant group called Al-Shabaab. Pitted against these heavily armed terrorists is a humble local community of Somali tribespeople who live in the Sabuli Wildlife Conservancy (SWC) in Wajir, northeastern Kenya. The SWC community aims to protect the region’s natural resources and conserve wild animals, while maintaining its traditional pastoral lifestyle.

Founded in 2017, the project cares for, among many other creatures, endangered reticulated giraffes whose numbers have plummeted by almost 40 percent over the last ten years, according to a report by People’s Trust for Endangered Species. Some 6,000 giraffes live in the Wajir county, making it the largest pool of this subspecies.

The giraffes are being targeted by a terrorist group of militant Islamic fighters. It’s a crisis we cannot ignore! But we need your help. 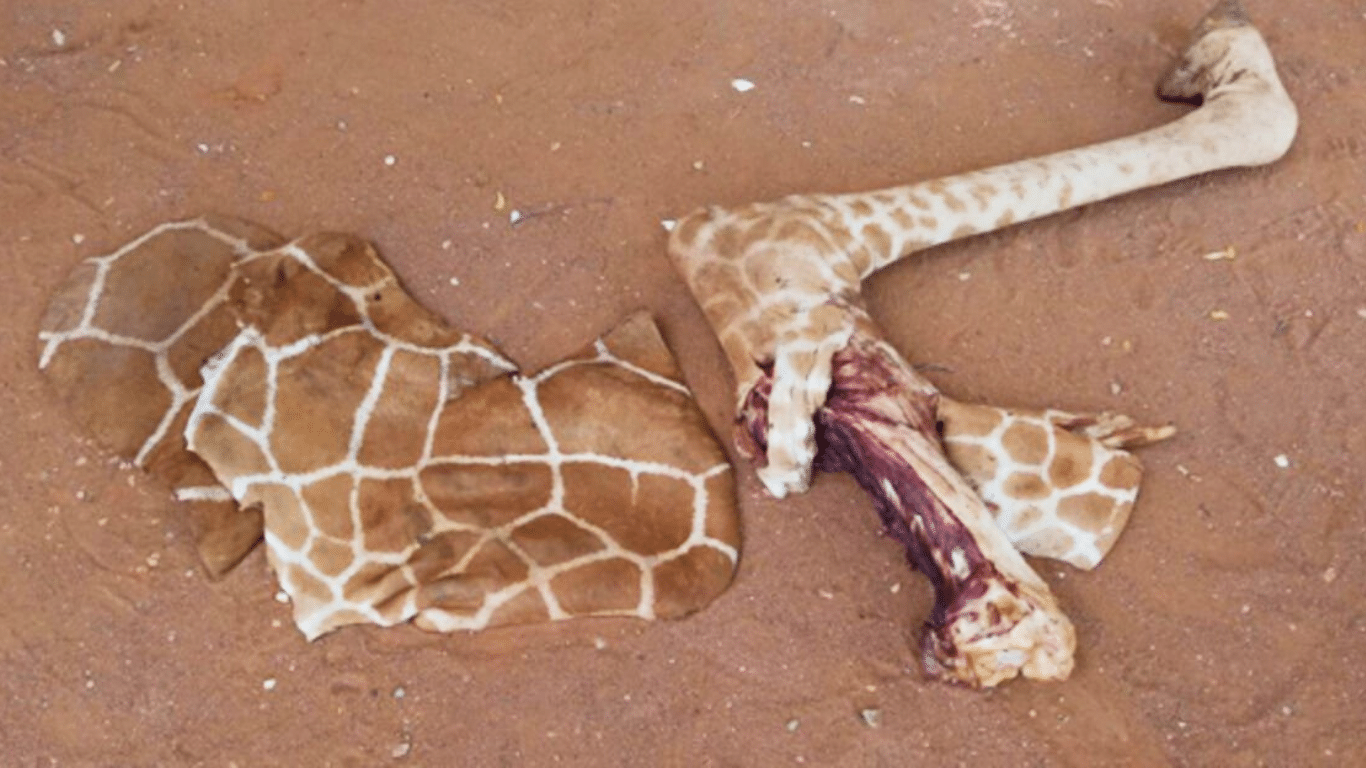 The terrorist group known as Al-Shabaab controls areas in Somalia on the border with Kenya. All the giraffes that used to live in the Al-Shabaab-controlled regions have almost been completely wiped out. Now Al-Shabaab has taken its massacres to the northeast of Kenya. The group kills giraffes for their meat to sell to Somalian refugees for profit and to buy more fighting materials. Giraffe meat fetches hundreds of dollars per pound/kilogram. Sickeningly, giraffes are referred to as ‘motorbikes’ in some regions because the money a poacher can make from selling the meat of a dead giraffe is enough to buy a motorbike. 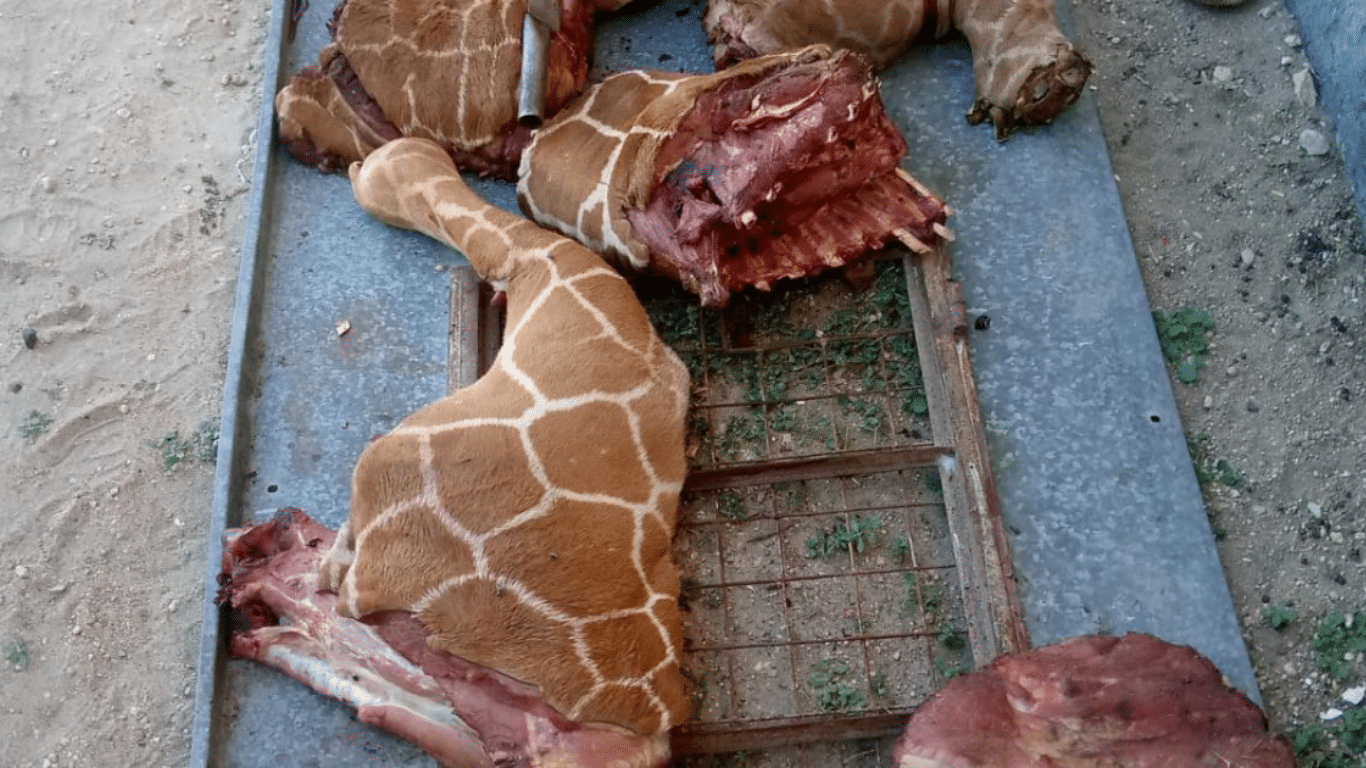 This is a representation of the situation

The Kenyan Wildlife Services (KWS) does an excellent job with the limited resources available and provides 12 anti-poaching rangers to the 21,620 square miles (56,000 square kilometers) of the Wajir county area, but KWS does not have the funds to provide more. This means that each time SWC anti-poaching rangers head out to stop another potential poacher in their tracks, they put their lives on the line.

SWC has asked us for help to equip its team with vital anti-poaching equipment to improve its ability to protect the animals. With your support, we will equip the team with the tools it needs for patrols and a high-tech anti-poaching drone – a tool we have proven to work effectively, with many of our wildlife partners in Africa. A drone can spot poachers effectively allowing foot and vehicle patrols to find them before they begin the giraffe slaughter. 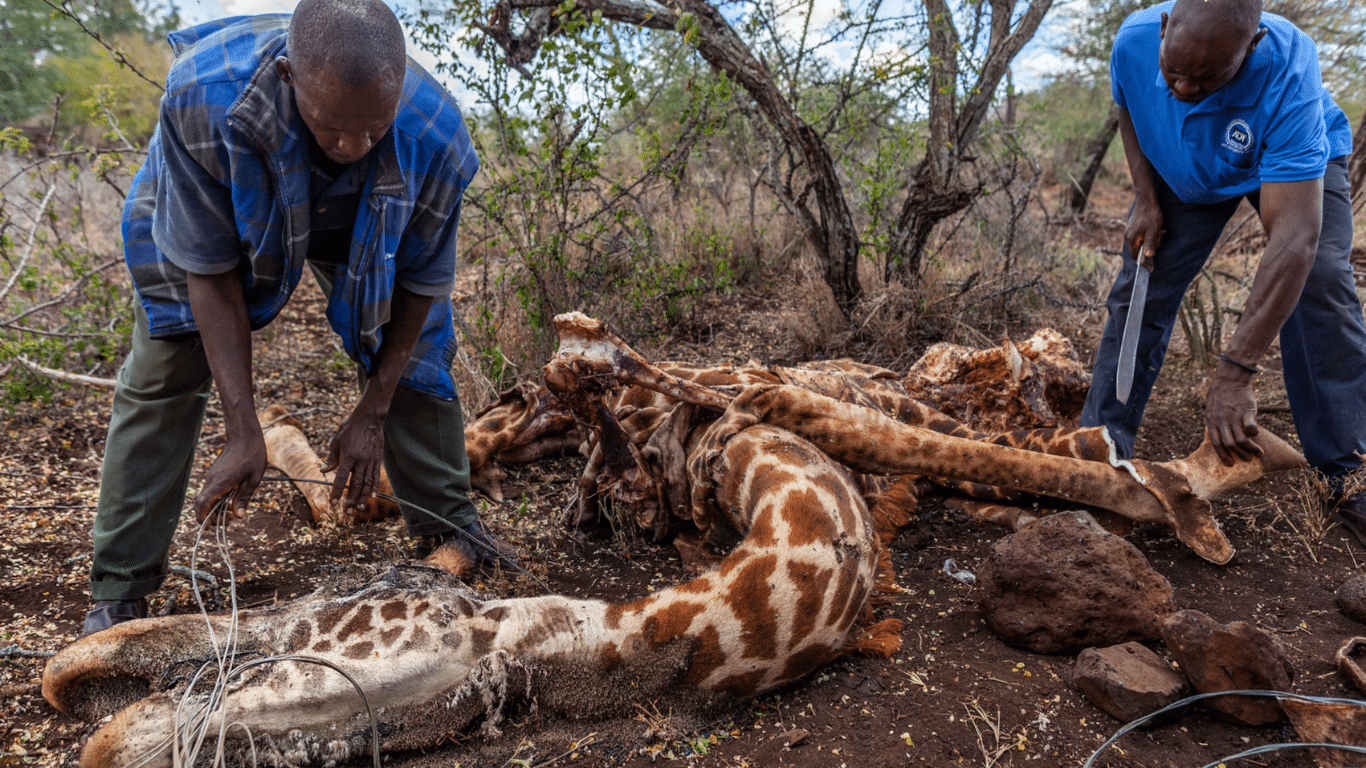 This is a representation of the situation

This help is URGENTLY needed because, without intervention, reticulated giraffes in the area will all be slaughtered. To make the situation even worse, a terrible drought has the region in its grip which has claimed the lives of countless animals.

We must equip the courageous SWC team with a drone and vital equipment for combating these callous criminals in their tracks. Giraffes are continuing to die, and poachers are continuing their slaughter unabated as teams like the SWC fear for their lives. 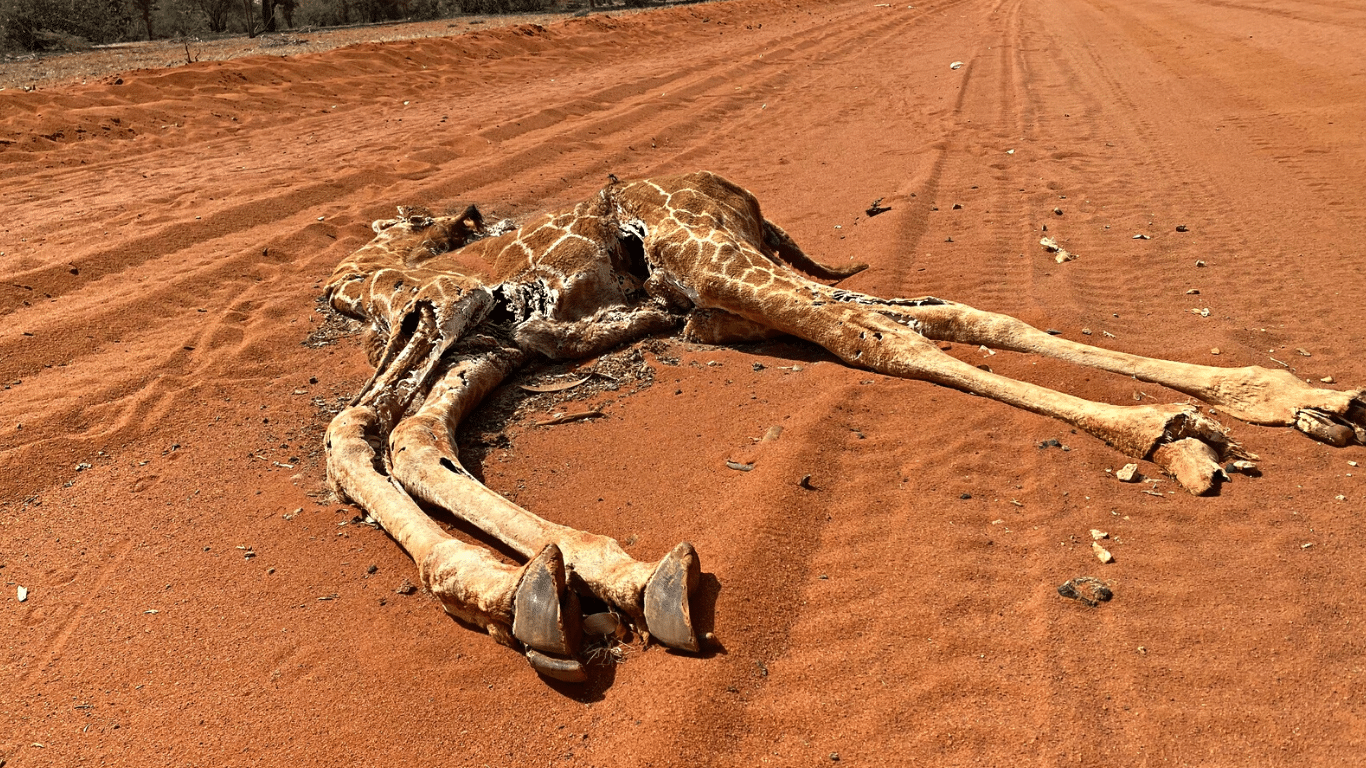 This giraffe died due to dehydration

Last year, we provided $8,000 (£6,300) for waterholes in the region, helping many animals survive. We can’t now turn our backs on the animals because of the actions of criminal gangs. With your help, we will provide the SWC team with the equipment it needs to combat poaching.

The reticulated giraffe, native to Kenya, Somalia and Ethiopia, has drastically declined in numbers over the years. In 2018, reticulated giraffes were added to the IUCN Red List (International Union for Conservation of Nature Red List of Threatened Species) and listed as ‘Endangered’. Poaching, hunting, habitat loss and fragmentation, and competition for resources with other animals have all contributed to their substantial decline in number – and now they face a new threat in the form of a terrorist group.

We must equip the Sabuli Wildlife Conservancy team with the high-tech tools it needs to protect giraffes – and its team members – from the lethal threat of terrorist poachers.

With an anti-poaching drone in its arsenal, the team will be able to monitor animals from above and cover a far greater area, and much more safely, than they can on foot. Drones use infrared technology to detect the presence of humans through body heat, enabling teams to accurately identify and locate criminals and dispatch teams to intervene – all without the anti-poaching rangers being detected themselves. The team will need to be equipped with the right gear and tools to reach and apprehend poachers efficiently. With your help, we will supply SWC with what it needs to protect giraffes. 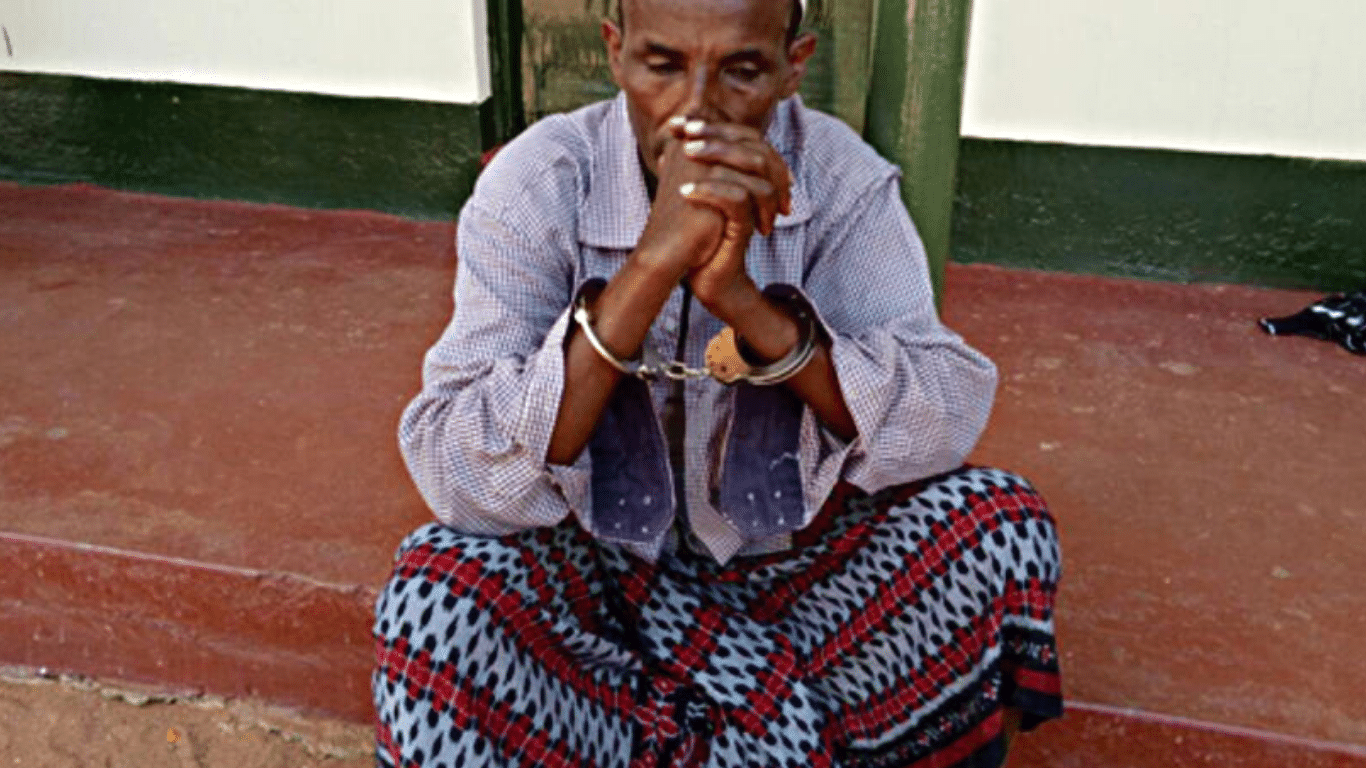 The Sabuli Wildlife Conservancy is primed to stop terrorist poachers in their tracks but the daily risk to its team’s safety is extreme. We must help protect SWC while it protects the dwindling giraffe species of Wajir.

Please help us to raise $10,000 (£7,850) to purchase a high-tech anti-poaching drone and vital protective gear and equipment for the brave SWC team, so it can continue to protect the rapidly declining reticulated giraffe population of Wajir. There is no time to lose.

P.S. The number of reticulated giraffes left in the wild is declining by the day. Not only do these animals face the threat of habitat loss and resource competition, but they must now contend with brutal and bloodthirsty terrorist groups who seek to slaughter and sell them for their meat – and then buy more weapons. We MUST get the Sabuli Wildlife Conservancy team a high-tech anti-poaching drone and the equipment they need to thwart these poachers in their tracks and protect the remaining, dwindling numbers of rare reticulated giraffes remaining in the African wild. Please, will you help by donating today?

Please use my donation to supply your partner’s anti-poaching rangers with the critical supplies they need – specialized equipment and a high-tech anti-poaching drone – to STOP MILITANT TERRORISTS (Al-Shabaab) from slaughtering giraffes and selling their meat to BUY MORE WEAPONS! This is OUTRAGEOUS and MUST BE STOPPED NOW! 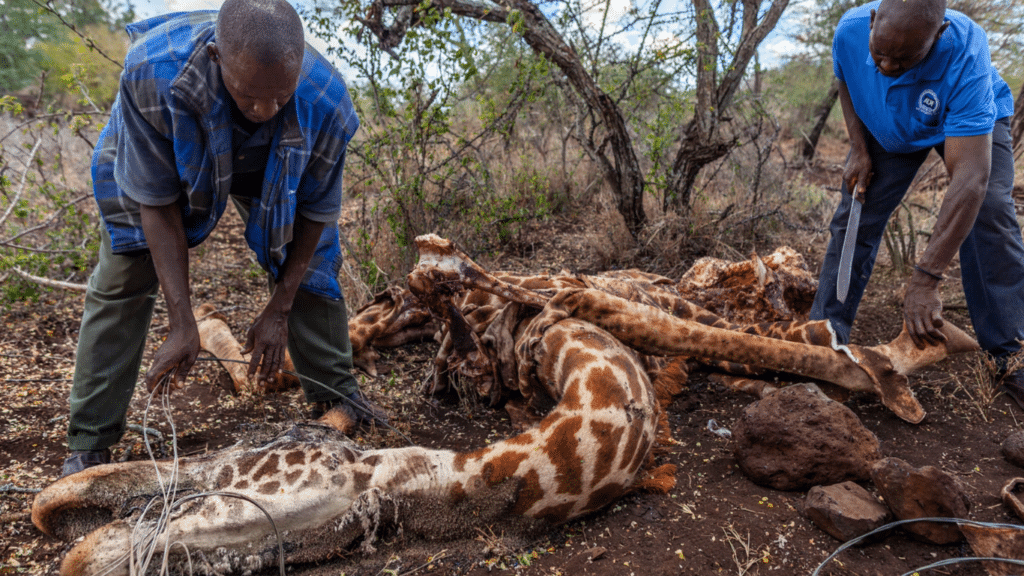