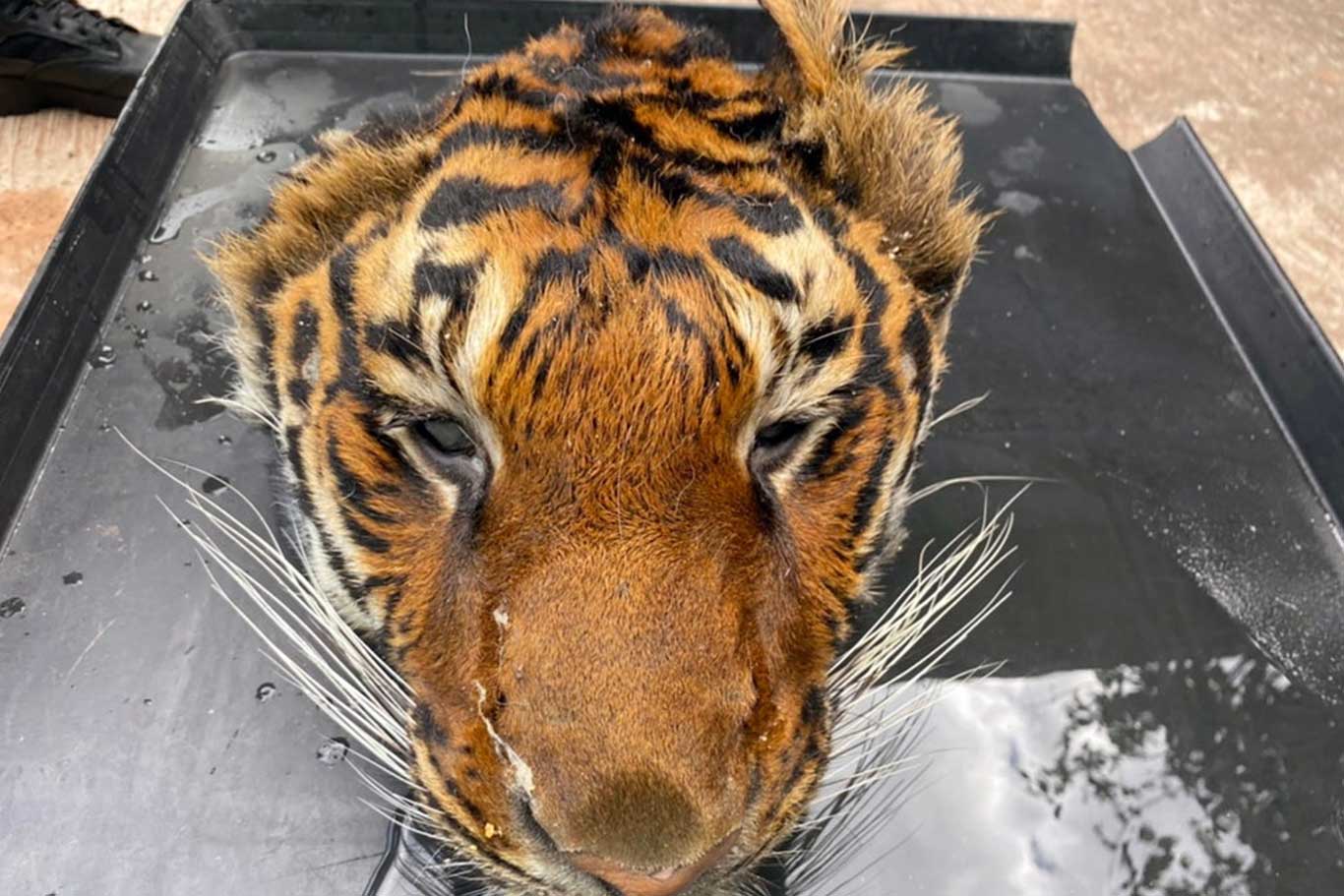 Gruesome details have emerged after the decapitated head of a tiger was found inside a private zoo in Thailand.

The animal's severed head was discovered on a black tray - with its eyes still open - along with several other dismembered tiger corpses, during a wildlife trafficking raid at the Mukda Tiger Park and Farm in Mukdahan, in Isaan province.

The Department of National Parks, Wildlife and Plant Conservation (DNP) confirmed that five live tiger cubs were also seized during the raid. Zoo officials claimed that the cubs were born at the facility, but DNA tests have since shown that three of them (one female and two males) were not related to any tigers in the park. This suggests the cubs had been smuggled illegally into the facility. The results of DNA tests on a further 20 tigers, including the two other cubs, will be released later this month.

The zoo's license was suspended for 90 days, and the animals have since been transported to Chulaphorn Wildlife Captive Breeding Centre in the Si Sa Ket province. The zoo owner faces up to five years in prison if found guilty of smuggling tigers and three additional years if convicted of falsifying information, reports the Bangkok Post.

The raid follows a crackdown at Mukda Tiger Park and Farm in January 2018, when DNP officials confiscated countless locally protected species, including red pandas, elongated tortoises, and monkeys such as grey-shanked doucs. Since then, the zoo has been under close watch by authorities.

Numerous other zoos and parks across Thailand have also been suspected of wildlife smuggling. Over 130 live tigers, more than 40 dead tiger cubs, tiger pelts, and 1,500 tiger skin amulets were among the wildlife products seized in 2016 when Thai authorities raided the Tiger Temple in Kanchanaburi province.

"One can only imagine what these poor animals endured before they died. It’s gut-wrenching and we hope that those behind the cruel deaths of these magnificent creatures receive the full wrath of the law. Thailand has some of the world's worst animal attractions, and it's time for these places to be shut down," said Nicolette Peters of the Animal Survival International (formerly Political Animal Lobby).

"Sensitive beings will continue to be trafficked, traded, and tortured as long as tickets are sold by facilities that use animals for entertainment. Please urge friends and family not to support cruel tourist traps."