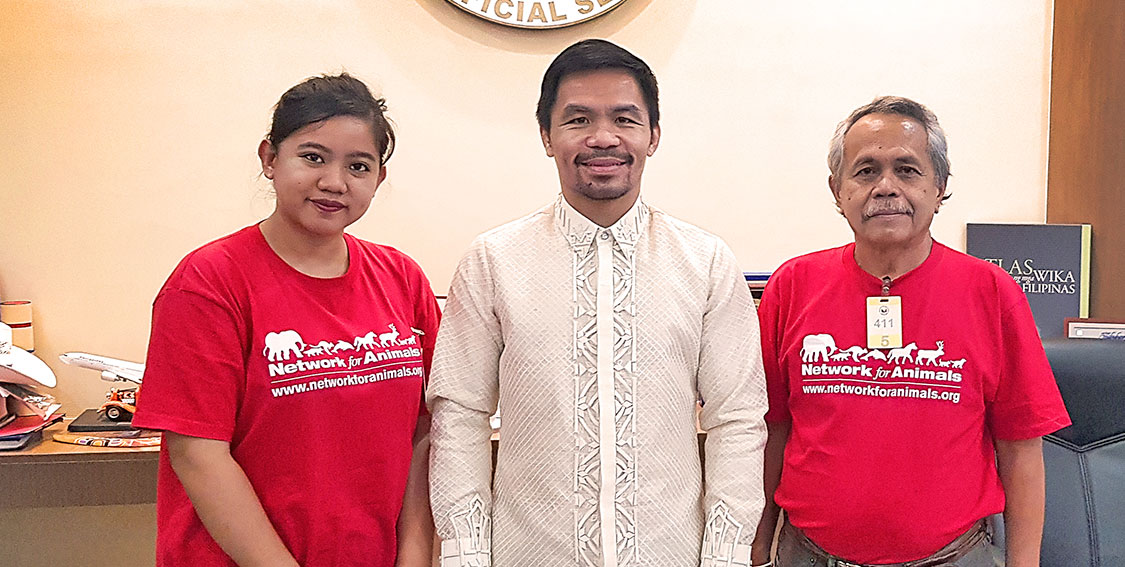 After two decades of persistent lobbying against the horrific dog meat trade, representatives of the Animal Survival International (formerly Political Animal Lobby) in the Philippines met with boxing legend Manny Pacquiao in the hope that he would throw his considerable weight behind animal welfare campaigns in his country.

The boxer is the pride of the Philippines and in 2016 was elected to the country’s senate. He is regularly mentioned as a future candidate for vice president and then president.

Pacquiao is an animal lover who during his boxing career, was regularly joined on early morning road training sessions by his dog, Pacman. Pacquiao is vocal in his condemnation of the cruel and illegal practice of horse fighting in his country and ASI is hoping that the Senator will endorse the efforts of ASI’s sister organisation, Network for Animals, which has been at the forefront of putting an end to the killing of dogs for the illegal dog meat trade in the Philippines.

“Our team in the Philippines is in talks with Mr. Pacquiao and his staff,” said ASI representative, David Barritt. “Although he rose to fame as a boxer, Mr. Pacquiao is today an influential member of the Senate of the Philippines. We believe that his support for our work would be a telling endorsement and might mean that finally, the people of the Philippines can turn their backs on the dog meat trade and the unimaginable cruelty it engenders.”