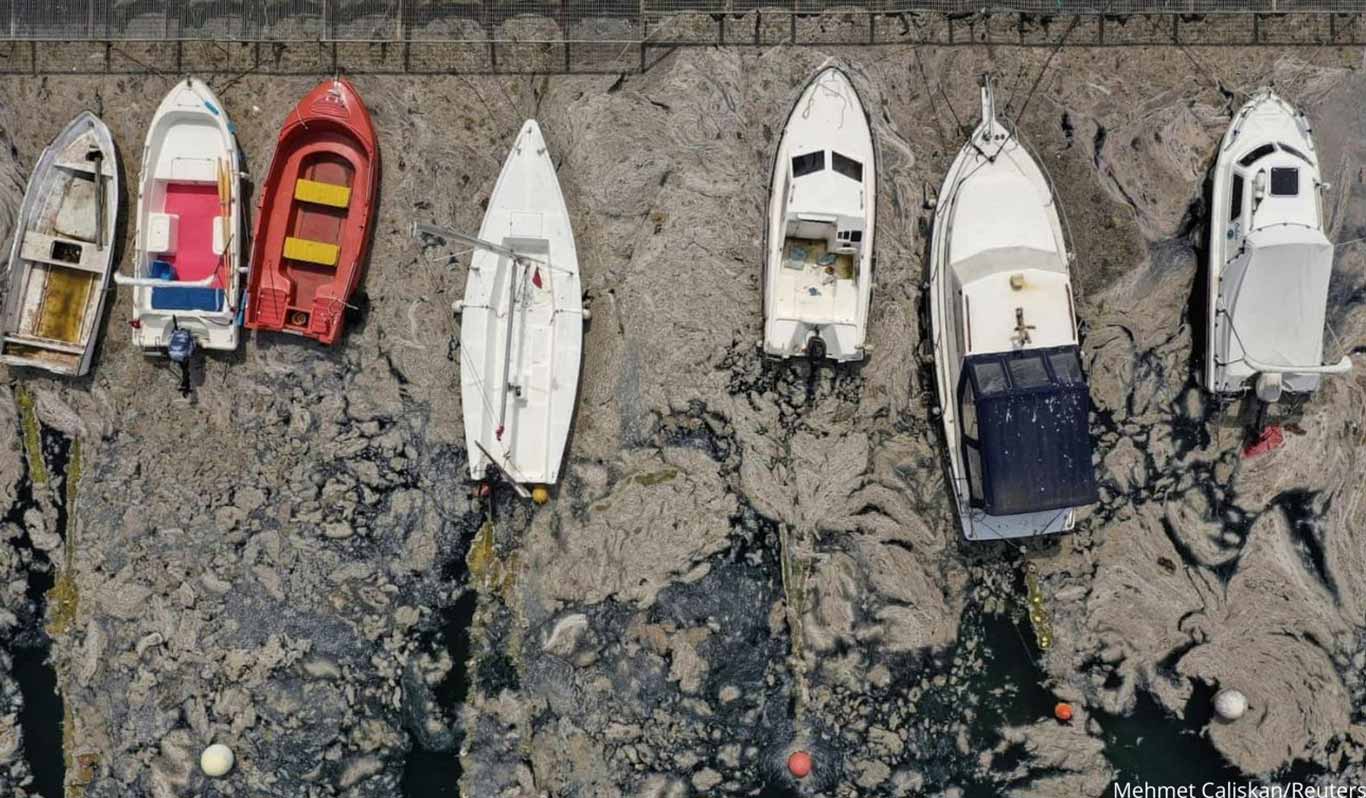 Turkey’s Marmara Sea is choking under a thick blanket of sludge, which scientists say is a direct result of pollution and global warming.

Decades of pollution from wastewater, pesticides, and sewage, coupled with biodiversity loss and rising water temperatures, have led to an environmental disaster, which researchers say has reached unprecedented levels.

Dubbed as “sea snot”, the marine mucilage is a result of algae that has bloomed out of control to produce a sticky mucus-like substance spanning many square kilometers through the sea south of Istanbul.

In some areas, the mucilage has sunk down to 30 feet (80 to 100 meters) below the water, smothering the seabed and destroying fragile ecosystems.

The Marmara Sea, an important waterway between the Aegean and the Black Sea, is home to diverse marine life, including approximately 230 species of fish and a variety of mollusks such as mussels and clams. But with the algae bloom absorbing much-needed oxygen from the water, the sea’s marine life is under severe threat.

Turkey’s government has responded to the crisis by launching a fleet of 25 emergency surface cleaning boats to clean up the mucilage using scientific methods.

The Environment Ministry has also announced it plans to designate the entire sea as a protected area by the end of the year.

According to scientists, to help reverse the cause of the mucilage, nitrogen levels in the water need to be reduced by 40%. To do this, all the provinces in the Marmara region must convert their wastewater treatment plants to a more sustainable waste management system. If measures are introduced quickly enough, oxygen levels will begin to rise, and the situation could start improving within months. But they warn that the sea will never recover to its original pristine state.

“This is an environmental catastrophe that should not go unnoticed by the rest of the world,” says Adrienne West of the Political Animal Lobby (PAL). “More and more of this kind of outright coastal decimation will start happening if we don’t stop using our oceans as pollution dumping grounds.”

Increasing temperatures and pollution levels are contributing to a surge in the frequency and scale of algal blooms around the world. Studies have found that oxygen levels have dropped in hundreds of lakes across Europe and the US in the past 40 years, because of warming temperatures and increased human activity — leading to more fish deaths, algal blooms and methane emissions.