In the Middle East, wealthy Gulf-state nationals buy wild animals to show off as status symbols. These animals are illegally imported, reared in captivity, bred, abused and then often escape or are discarded. This is no life for any wild animal, and no exotic species is safe from the illegal exotic pet trade: lions, chimpanzees, cheetahs and tigers are all kept as pets in countries like Kuwait, Saudi Arabia and Dubai.

Najla and Sara are lion cubs rescued from the illegal pet trade in the Middle East. Right now, they are stuck in a zoo in Kuwait. With your help, we will transport them to a safe sanctuary in South Africa where they can live in peace.

Najla and Sara, both 13-months-old, were acquired illegally and have only known life in captivity…

Sara was rescued from Bedouins who intended to shoot her because they had been unable to sell her. She was rescued in the nick of time, malnourished, traumatized with cuts all over her face. She had been declawed and defanged – two senseless and extremely cruel, painful methods used to make a wild animal “safe” enough to be handled by humans, by leaving them defenceless.

Najla meanwhile was kept as an illegal pet. She was confiscated from the hands of her irresponsible owner and taken to a zoo.

Najla and Sara were taken to the only safe place that would care for them: a zoo in Kuwait, where each female is living in a 6.5 square-foot (two-square-meter) enclosure. They have slowly been nursed back to health but this is ONLY a temporary solution, and they cannot – and MUST not – stay at the zoo indefinitely.

The zoo only offered to take the cubs on condition that they would not remain there forever, and we are terrified at the thought of what could happen if these lions are not moved. In Kuwait, it is common for animals to be euthanized without a second thought!

The unsuitable and cramped environment is taking its toll on the growing cubs. The lionesses are becoming more and more frustrated, anxious and depressed from being trapped in tiny rooms 24/7 with no stimulation, no enrichment and no time outdoors.

Najla and Sara are struggling to cope in captivity – BUT they have an opportunity to fly to a sanctuary in South Africa as soon as next week…
…if the funds can be raised for their flight.

Please help us raise the funds to secure their flight – we have just a few days to do it. We have managed to find some money, but sadly not enough. If you can possibly be generous today and we can raise another $7,500 (£6,100), we can get Najla and Sara to safety in a place where they can be left in peace for the rest of their lives.

Please , we MUST help them!

For months, The Lions Foundation in the Limpopo province of South Africa, has been working hard to prepare everything for the lionesses’ safe relocation to their big cat rescue sanctuary. The Lions Foundation provides lifetime shelter, rehabilitation and care to big cats rescued from circuses, private ownership, zoos and animal parks. The sanctuary provides a wonderful semi-wild home for big cats previously kept captive and who cannot be released into the wild.

Everything is ready for the cubs: their new home is prepared, their permits are approved, their travel crates are ready to be loaded… all that is needed now is the remaining funds for the flight! Your donation will really make a difference.

The end of their ordeal is within reach and with your help we can give them the life they deserve.

P.S. Owning an exotic wild animal in Kuwait is illegal but for those with ‘wasta’ (personal connections and influence), keeping a wild animal as a pet is easily arranged. Once the owner tires of them, these animals are often killed.

P.P.S. Lions cannot be tamed or domesticated because of their natural tendency to become aggressive as they grow older. Keeping these animals as captive pets is heartless, inhumane and dangerous. The Animal Survival International team can imagine a no better holiday gift than to see Najla and Sara safely in their new home. Please, help us make this holiday dream come true!

I am SO pleased to know that all is arranged to FREE THE TWO LION CUBS, Najla and Sara, from their miserable captive “life” in small enclosures in a Kuwait zoo and SEND THEM ON THEIR FREEDOM FLIGHT to a sanctuary in South Africa! Recognizing that TIME IS OF THE ESSENCE, and you have JUST A FEW DAYS to pay for their flight, I am RUSHING the most generous donation I am able to send today, to ensure the two cubs will soon be on their way to a life of peace and happiness. What a wonderful holiday gift it will be for Najla and Sara. Please, update me on their journey and new life! 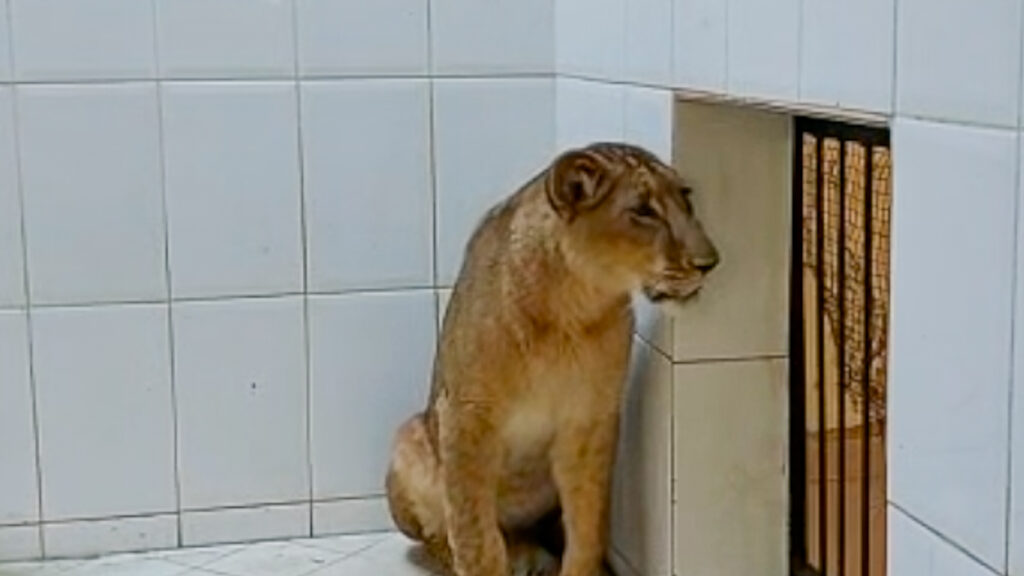