In the Democratic Republic of Congo (DRC) in Central Africa, the rampant illegal wildlife trade is destroying many precious endangered animals.

Bonobos, an endangered great ape species which shares more than 98% of its DNA with humans, are a tragic example.

These peaceful, forest-dwelling creatures are native only to the DRC and are routinely hunted from the wild by poachers hunting for meat to sell at markets (bushmeat), and to be kept as exotic pets. Some superstitious people hack off the apes’ body parts – falsely believed to have ‘magical’ properties – and use these in phony traditional “medicines.” 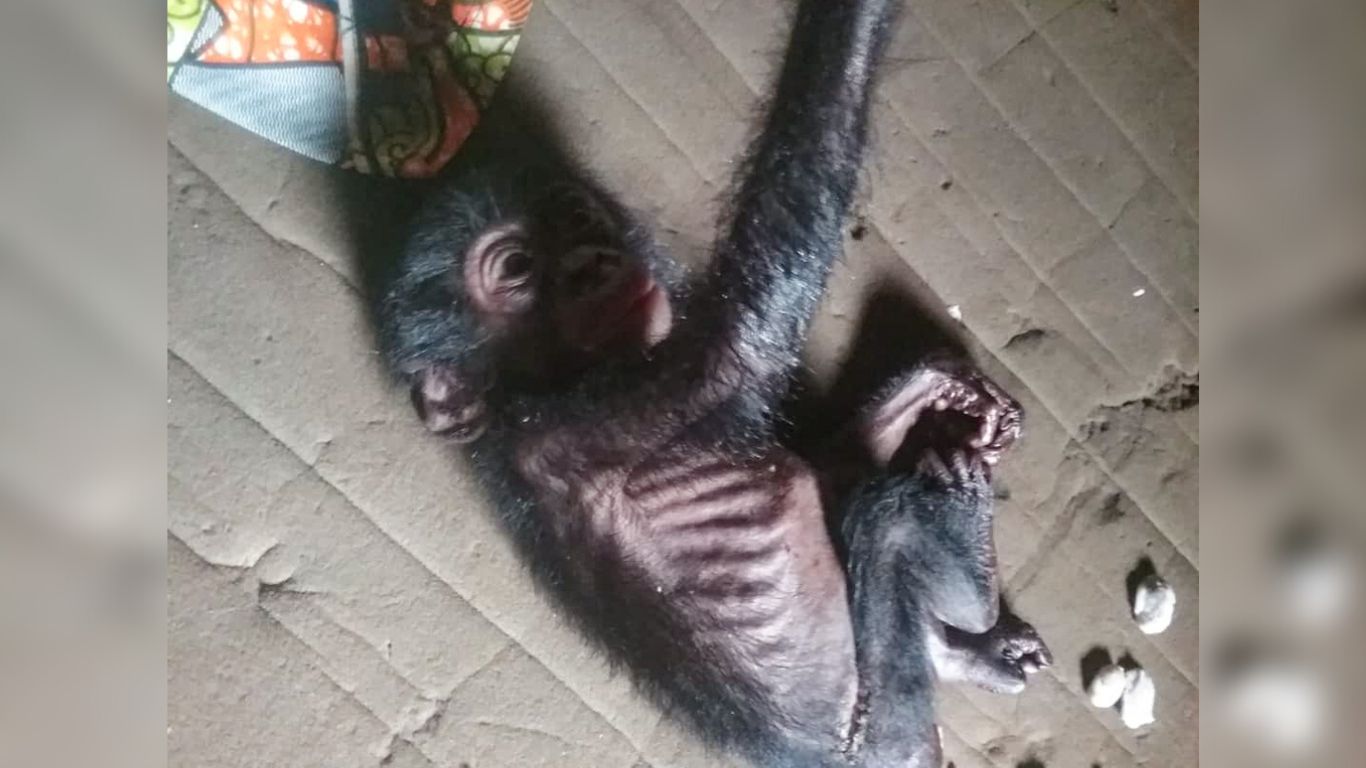 Starved and neglected, Ikele was found in a deplorable condition upon rescue by Friends of Bonobos in Kinshasa.

With your support today, we can help our partner Friends of Bonobos in Kinshasa rescue bonobos care for, and rehabilitate them then release them in a protected reserve.

The bushmeat trade is the biggest threat to bonobos – it may be hard to believe, but increasingly endangered bonobos are casually slaughtered for the cooking pot in Africa. Hunting for bushmeat affects over 500 wild African species but is particularly harmful to great apes. Because they have small populations and slow reproductive rates, all apes struggle to rebound from overhunting. Their extinction would be disastrous as they perform a vital role as seed dispersers, critical for forest regeneration in the rapidly declining wilderness areas of the DRC. 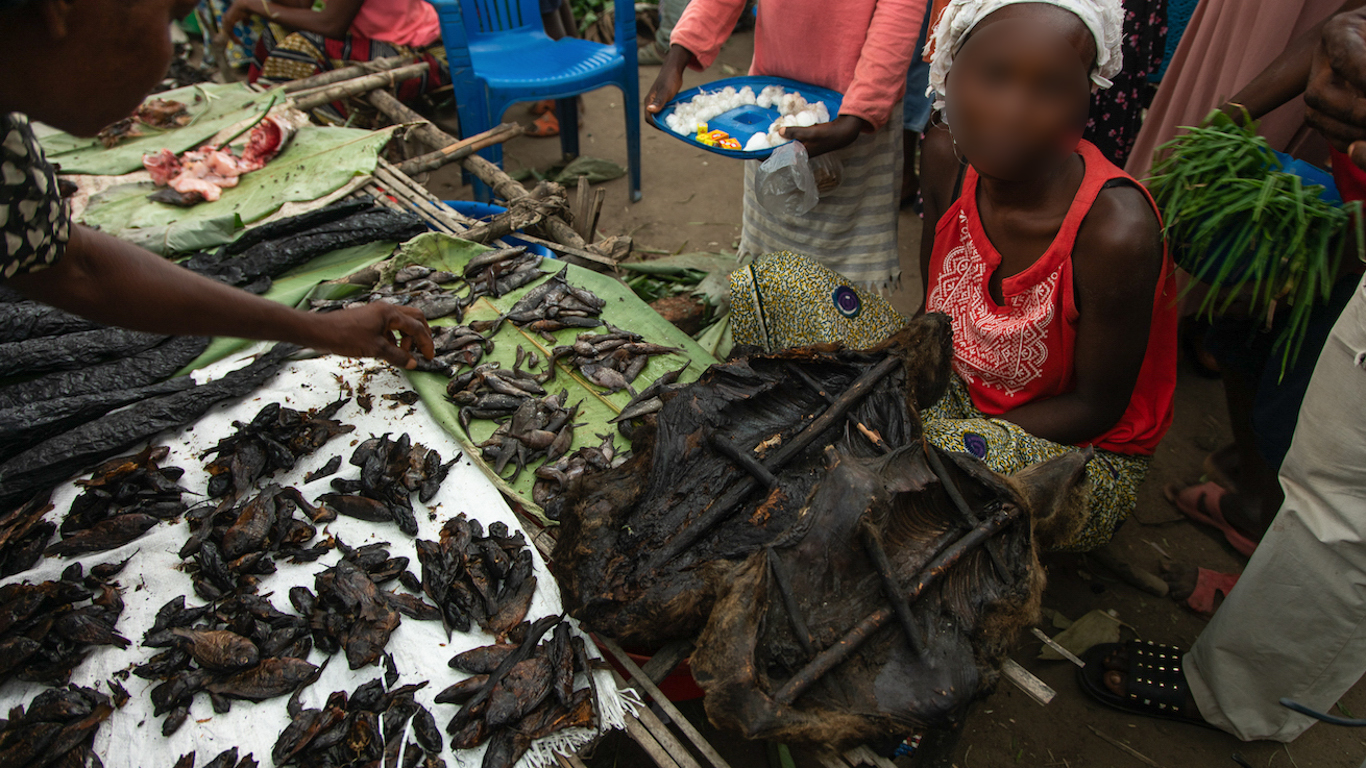 Bonobo populations have dropped dramatically over the last 30 years. It is estimated that as few as 10,000 remain in the wild today. Killing even small numbers of bonobos can critically impact the species’ population and, in turn, the habitats they keep healthy, which is why we must take action – and fast.

We have partnered with Friends of Bonobos. The Kinshasa-based organization has the world’s only bonobo sanctuary and rewilding program. This devoted team works with Congolese wildlife protection officials and local communities to rescue bonobos, provide them with essential care and rehabilitation and release them in a protected reserve where skilled forest guards carefully monitor them. 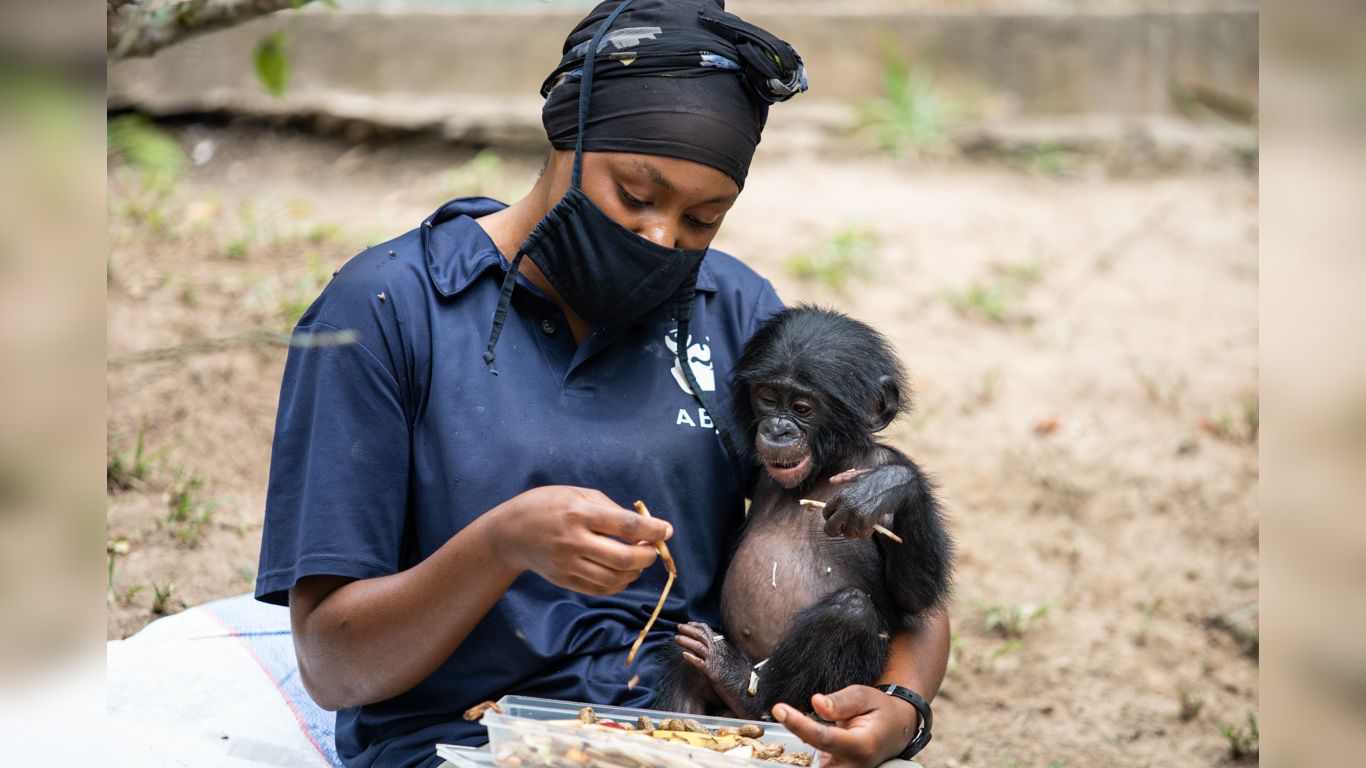 The bonobos who come into our partner’s care have often experienced severe physical and psychological trauma following the slaughter of their families and abuse at the hands of poachers. Bonobos arrive at the sanctuary injured, dehydrated, malnourished and riddled with intestinal parasites. Vets who examine them tell us many appear depressed. In extreme cases, some bonobos suffer from severed fingers, rope burns and bullet wounds.

Over the past two years, Friends of Bonobos have rescued 20 bonobos. 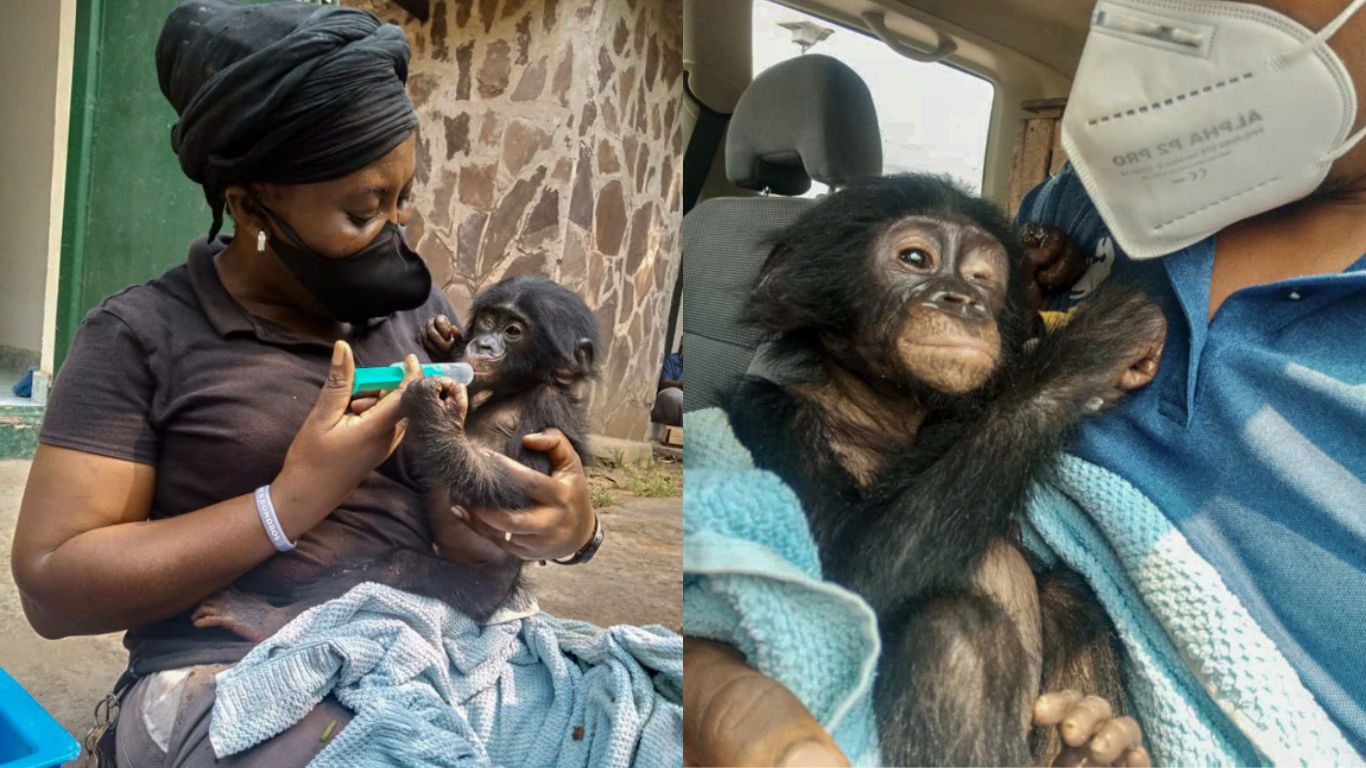 Lofute receives love and care as he recovers from injuries sustained to his eye due to beatings suffered at the hands of poachers.

Poachers often target mothers with infants so that they can profit by selling the mothers for their meat and babies as exotic pets.

The influx of rescued bonobos at the sanctuary has put immense strain on their clinic, nursery and rehabilitation program. We have a plan to help continue the critical work but, we DESPERATELY need your support.

If we can raise $5,000 (roughly £4,100), we can provide Friends of Bonobos with funds for life-saving veterinary treatment and medications for sick and injured bonobos rescued from the barbaric illegal wildlife trade. Your donation right now will provide vital antibiotics and hydrating fluids, procedures to remove bullet fragments, and long-term rehabilitation so the animals may one day return to safe and protected wild areas. Please, will you help us? 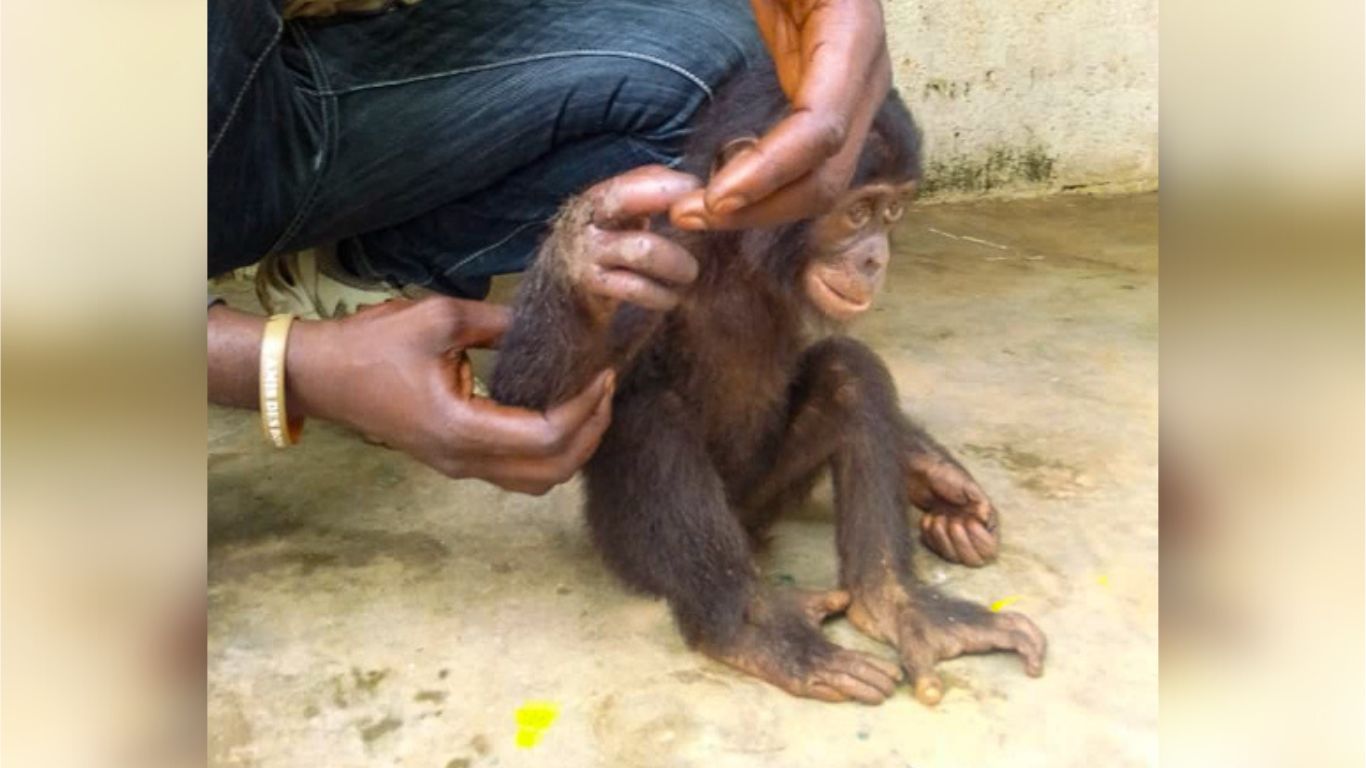 Loolo, pictured above with an injured and swollen hand, is one of the many young bonobos rescued and treated by the sanctuary.

Worth approximately $23 billion (over £18 billion) each year, the illegal wildlife trade has led to international criminal syndicates exploiting low-risk, high-reward opportunities across the globe, and the DRC is ground-zero for the rampant African wildlife trade. The Congo is a haven for some of the most endangered species on the planet, bonobos included. Yet law enforcement is feeble, and corruption is out of control.

Bonobos are extraordinarily sensitive, gentle creatures who prefer to resolve conflict through affection rather than aggression. Dubbed the “make-love-not-war” primate by researchers, there is so much we can learn from bonobos. They show empathy for both their loved ones and strangers. Sadly, humans have not shown much empathy for bonobos – we have hunted them, sold their babies as pets and depleted most of their natural habitat.

Please show these kind and gentle creatures that not all humans are so callous and cruel by donating as generously as you possibly can to Animal Survival International today, and help us give them the care, nurturing and protection they deserve.

The illegal wildlife trade threatens so many precious animals – the peaceful bonobo (often referred to as Africa’s “forgotten” ape, and with whom we share 98% of our DNA) among them. Only a few thousand bonobos remain in the wild, so it is essential we do all in our power to help rescue as many as possible, provide them vital veterinary and rehabilitative care and release those who can be released to a safe, protected area.

You can count on me today to help you and your partner, Friends of Bonobos in the Democratic Republic of Congo, now – we cannot stand back and allow these animals to be wiped from the face of the earth!