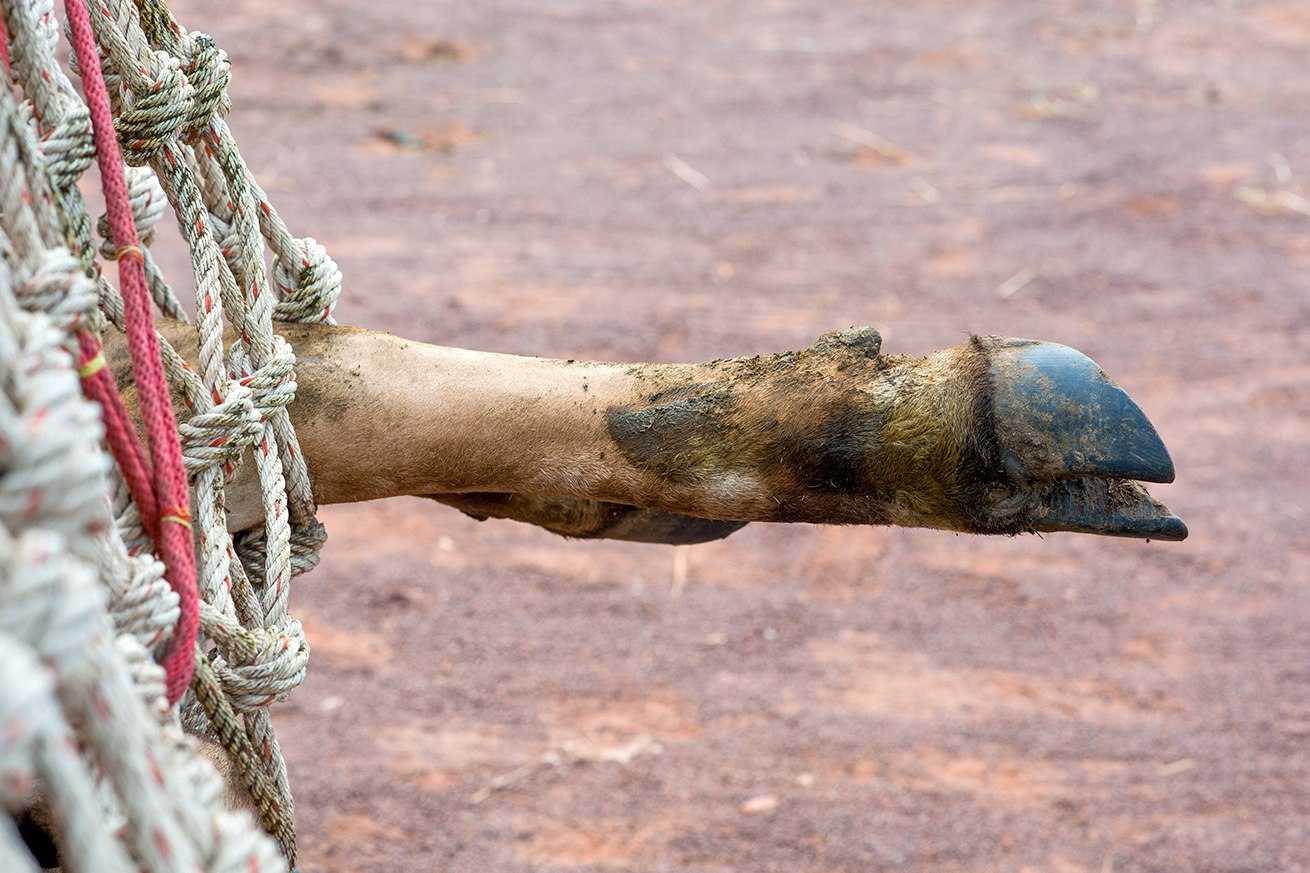 In a devastating blow to its wildlife, South Africa plans to declare its wild animals as meat for human consumption and allow unrestricted farming of everything from lions, giraffes and rhinoceros to tiny antelopes.

Under the proposal, any wild animal may be used - no distinction is made between domestic animals and wild creatures. No animal is taboo. The proposed Act of Parliament specifically lists 104 wild animals that can be farmed, but also stresses that the law will apply to all other species of animals including birds, fish and reptiles. Their genetic material, embryos and body parts can be harvested and traded.

The mighty lion is already treated just like a cow: lions can be bred and slaughtered for their bones to be sold on international markets as a substitute in tiger bone wine and used in jewellery. Lion cubs can be taken away too early from their mothers, who will give birth to many more offspring in their lifetimes in captivity than they would in the wild. The proposed amendment to the Meat Act (2000) will worsen the conditions of lions and all wildlife in South Africa.

There will be no more wildlife, only livestock and meat.

The South African Meat Safety Act of 2000 regulates the safety of meat and animal products, abattoir standards, and the import and export of meat. This February, the Department of Agriculture, Land Reform and Rural put forward motions to include in the act an inexhaustive list of creatures that “may be slaughtered as food for human and animal consumption”. Even worse, the amendment is to include “animals that may be listed as threatened species in accordance with conservation provisions”.

This could be an important development for game farmers, according to the Farmer’s Weekly, and would allow them to legally slaughter their game populations, and distribute the meat in a sanitary and safe manner. According to WWF, the wildlife game meat economy can contribute to rural development, job creation and security through the establishment of abattoirs in private and state-owned conservation areas. Why the law should extend to cover animals such as lions is a troubling mystery, since South Africans do not customarily eat lion meat.

EMS Foundation sheds some light on the matter. They report that a challenge to the lion bone export trade in South Africa has been that, until now, the bones have been exported as “trophies”, but because they are used for human consumption, they need to be exported under a food export permit – and therefore regulated under the Meat Safety Act. The same would apply for any species being exported for human consumption – be that food or medicine. Until now, lions have not been included on the list of meats suitable for human consumption in the Food Safety Act, nor in the Meat and Animal Export Procedures of South Africa, according to EMS. The same applies for rhinoceros.

The new Meat Safety Act amendments change all of this. Now, any animal can be exported under the new food safety and export laws, and the way for trading in the prized lions and their bones has been smoothed.

The Meat Safety Act amendments argue that the new rules might benefit land owners seeking to slaughter their excess animals, but in combination with the recently passed Animal Improvement Act, the scenario becomes more sinister. The new laws leave many grey areas for an already murky and poorly-regulated captive game industry, and there are no guarantees that wildlife would be kept under the same free-ranging conditions as the WWF might suggest.

The proposed laws raise other questions, such as why endangered species like the rhinoceros, oribi - or any other species for that matter – should be included on a list of species deemed appropriate for human consumption and export. As Italian magazine, La Stampa, points out, the export market is highly profitable, and the “meat” is not limited to what people will eat.

Effectively, the combination of these acts promulgated by the Department of Agriculture, Land Reform and Rural Development together with the Department of Environmental Affairs, Forestry and Fisheries, allows for the export of any of South Africa’s endangered wild animals, not just those on the list.

The government can simply introduce the new regulations based on advice from ‘experts’. In practice, that largely means people sympathetic to the government’s wishes, with animal welfare organizations mostly excluded from the process. If this isn’t Machiavellian enough, the government has put a time limit on when submissions can be made – April 30 is the deadline and South Africa is in total lockdown until then because of the corona crisis.

Insult is piled on to injury because the legislation is being driven by South Africa’s Department of Agriculture, Land Reform and Rural Development which is charged with ensuring the well-being of numerous endangered species.

Minister Thoko Didiza seems to be following China’s laws on wildlife, where until recently stock farming of wild species has been commonplace. “Well, we know how that turned out,” said the Animal Survival International (formerly Political Animal Lobby)’s Nicolette Peters. “China’s so called wet markets, where wild and domestic animals are held in close proximity in unhygienic conditions and in close contact with humans.” The outbreak of the COVID-19 coronavirus, is believed to have originated in a wet market, from a wild animal – potentially a pangolin.

ASI is outraged that, in the midst of a global pandemic that is believed to have originated from contact between humans and wild animals, the South African government is proposing a law that will allow unfettered consumption of any animals whatsoever, wild or tame. It is well-established that lion bones can carry diseases and toxic sedative residues that can be harmful to human health. Even more commonly-eaten game meats are increasingly prone to disease, and the need for antibiotics to treat them.

Opening up the entire South African biota to global consumption is blatantly irresponsible and retrogressive when it is well-established that 70% of new infectious diseases originate from human contact with animals. Epidemiologists and climate change experts alike warn of more pandemics in the future as humans disrupt last remaining wild habitats and come into closer contact with wild animals. What the South African government is about to do, places its entire human population at greater risk, along with tourists who visit the country.

Not only does the South African government propose to aid in putting the entire globe at risk of future pandemics, but also the survival of already endangered wild species. Making the parts of endangered animals available for medicine, fetishes or meat – even if it is from wild animals bred like cattle in captivity – stimulates demand for animals caught in the wild.

But the reclassification of wild animals as livestock throws into question China’s own laws about trade in wild animals. If South Africa classifies threatened wild animals as livestock, where does that leave China’s legal position on the trade in wildlife? More than a million pangolins alone have been killed in the last decade, and the majority of these are caught in Africa and sent to the Far East for medicine and meat. In South Africa, a rhino is killed every 15 hours, and just the horns are exported for use in virility potions. These changes to legislation do not bode well for endangered species.

Reclassifying wild animals as livestock and legalizing the slaughter and consumption of all species without any off limits is, as far as ASI can make out, an unprecedented law.

The changes that have been made under the newly established Department of Agriculture, Land Distribution and Rural Development are a threat to biodiversity and the well-being of the South African environment which is a constitutional right and state duty. They are evidently poorly conceived and fit neatly into the existing economic exchanges between South Africa and China, which favour the Chinese market and South African middlemen, and threaten to extinguish wildlife as we know it.

Peters expressed ASI’S concerns: “The wording of the South African government’s proposals are so badly worded that even humans can be slaughtered and eaten. There is no respect for life, human or otherwise. ASI is completely opposed to allowing the unbridled slaughter of all living creatures in South Africa. We also find it repugnant that rare and precious species like lions, cheetahs and giraffes amongst many others, are to be treated simply as objects to be raised and traded. The South African government’s decisions over our wildlife are disgraceful and must be challenged.”

There is an extremely limited period in which people can critique the proposals. The deadline is April 30 to oppose these inhumane and extremely disturbing law changes. ASI urges our supporters and all people concerned about biodiversity, animal welfare and the rights of all creatures to life to oppose the passing of these amendments.

Comments can be sent to: